Breaking Up Big Tech And Its Effects On Digital Advertising

With Big tech increasingly dominating the advertising industry, understanding how these companies operate is more important than ever. Here’s a look at some of the ways Big tech is changing advertising. ​

Big tech companies can target ads very precisely, thanks to big data and powerful algorithms. This means that ads are becoming more and more personalized, which can be both good and bad. On the one hand, it’s great to see ads for products you might be interested in. On the other hand, it can be creepy to feel like you’re being watched. In reality, 70% of consumers would click on an advertisement that showcases a brand they know versus a general brand, considering it is more “personalized.”​

Big tech companies use their vast resources to develop new ways to persuade people to buy things. For example, they’re using data to determine what people want and tailoring ads to appeal to those desires. They’re also using AI to create “chatbots” that can simulate human conversation to sell products. Specifically, targeted ads implement cookies to track users and optimize relevant ads based on user search patterns and preferences.​

As Big tech companies get better at targeting ads, they’re also getting better at placing them in front of people in a way that’s harder to ignore. For example, they’re using “native advertising,” which means ads designed to look like regular content. They’re also placing ads in unexpected places, like your lock screen or social media feed. Access to consumers has been relatively accessible for advertisers considering that media usage percentages have gone up significantly year-over-year; there is always a time to target a consumer through media applications. ​ 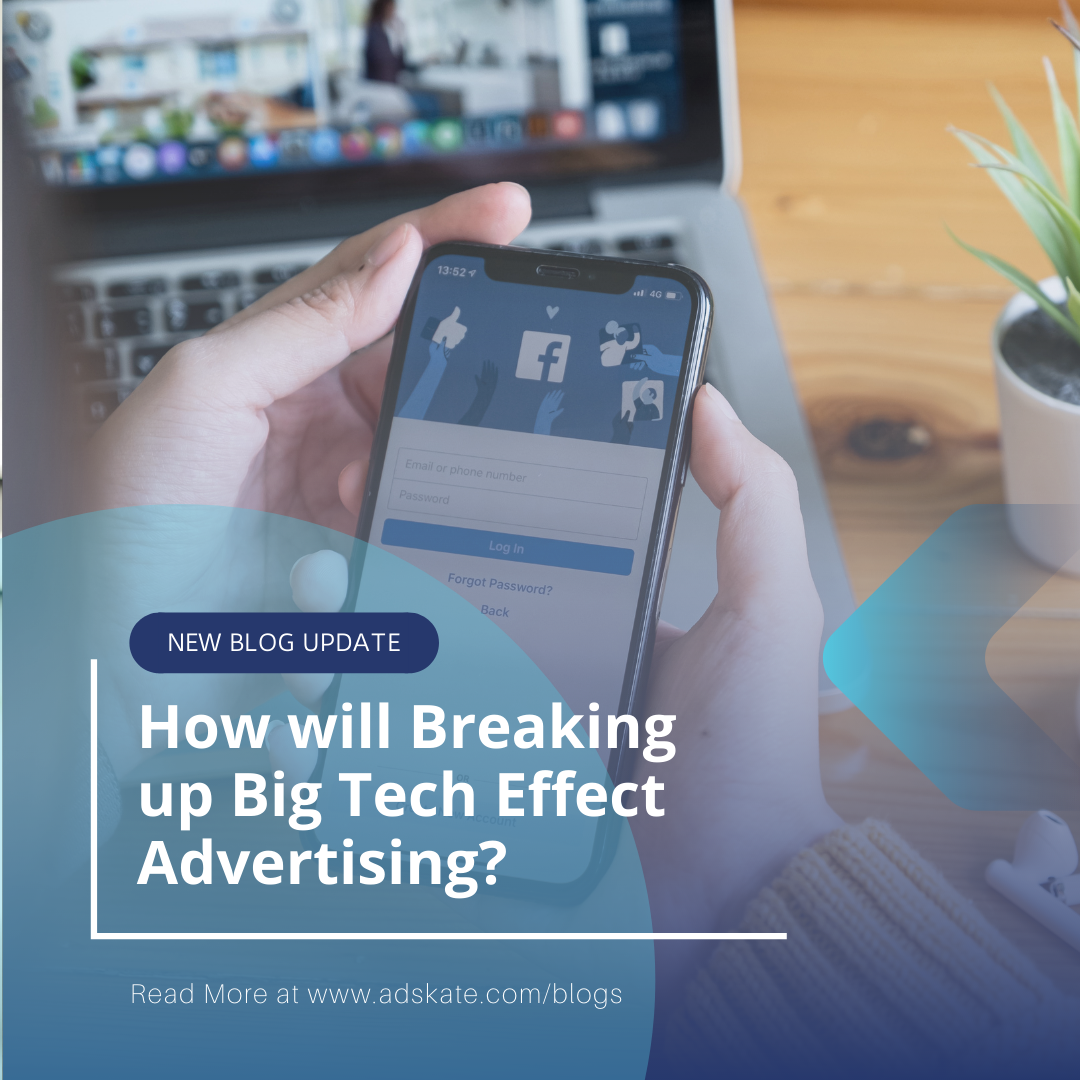 What could the breakup of Big tech entail for the ad tech industry?

Currently, the “triopoly,” Google, Facebook, and Amazon, earn more than 60% of the dollars spent on digital ads every year, which amounts to more than $20 billion in digital ad revenue. Big Tech has changed the ad tech industry entirely. However, Big tech companies have come under fire for their size and power in recent years, which has wreaked havoc on data privacy issues.

With privacy becoming an increasingly important issue, governments worldwide are enacting privacy laws to protect citizens. The General Data Protection Regulation (GDPR) in the European Union and the California Consumer Privacy Act (CCPA) in the United States are just a few examples. These laws regulate how businesses collect, use, and disclose personal data. They also give individuals the right to know what personal data is being collected about them and the right to have that data erased. Advertising networks are particularly affected by these privacy laws. They rely on collecting personal data to target ads, but under GDPR and CCPA, they must get explicit consent.

Big tech companies like Google and Facebook continue to grow, increasing pressure on antitrust regulators to take action. Some critics argue that these firms are too big and have too much rule over the economy. One area where this debate has been particularly heated is in the realm of advertising. Big tech companies like Google and Facebook dominate the online advertising market, and some say that this gives them an unfair advantage.

In the past, the government tried to break up tech monopolies, exemplified in the lawsuit against IBM in 1969 and the other lawsuit against Microsoft in the 1990s. Both ended without resolutions.

Now, there are growing calls to break up big tech companies. This would mean splitting up these firms into smaller, more manageable pieces. And one effect of this could be a shake-up in the ad tech industry. Big tech companies have deep pockets, and they’ve used this to their advantage regarding ad spending. They’ve outbid their competitors and acquired many of the most popular advertising tech platforms. If Big Tech is broken up, it’s possible that these firms would no longer have the same financial clout. This could lead to more competition in the ad tech space and better products and services for consumers.

Facebook is quite a popular platform for advertising. More than 9% of Facebook accounts are used for digital advertising, Facebook makes up 18.4% of global mobile digital advertising, and 92% of social marketers use Facebook for advertising. The platform is a go-to for small businesses to advertise their products and services, and they make up the majority of the platform’s 8 million advertisers. Facebook’s most prominent competitor appears to be Instagram, and ironically, Instagram is owned by Facebook. The two sharing data amongst one another leaves little opportunity for other platforms to implement themselves in the advertising ecosystem successfully.

How prosperous is the Advertising Industry?

Facebook’s DSP is its Ad manager, which programmatically sells its inventory and offers typical targeting settings that a regular DSP has. Its Ad Manager will strictly sell Facebook inventory based on ad formats solely on Facebook with Facebook.​

Google, on the hand, uses Google Ads as its DSP, formally known as Google AdWords, which allows advertisers to place search results for their domain on Google’s search engine result page by paying for it. The difference between Google Ads and other DSPs it that Google strictly only sells its inventory.​

Amazon DSP allows advertisers to engage with an off-Amazon audience and attract them to the Amazon platform. With Amazon’s DSP, these ads can be found in various formats, including mobile banner ads, desktop display ads, and in-stream video ads.​

If Facebook were to be separated from Instagram and Whatsapp, the ability to combine data between the platforms would be lost. However, this, in turn, would make media spending for advertisers more expensive and less accurate. ​

Of course, it’s impossible to say definitively what would happen if Big tech was broken up. But this would be a significant change for the industry, with far-reaching implications. So it’s something worth keeping an eye on in the coming months and years.​

And they’re both starting to get more aggressive about pushing their advertising products. In 2019 alone, Google and Facebook were accountable for more than half of all digital advertising spending.​

What does this mean for the future of advertising?

And they’re both starting to get more aggressive about pushing their advertising products. In 2019 alone, Google and Facebook were accountable for more than half of all digital advertising spending.​

So, while the break up of Big tech would be a big blow to the advertising industry, it could be good news for ad tech companies.​

Is Netflix Going To Enter The Advertising Landscape?
Digital Advertising Prices Are Rising. Here Is Why And What To Do About It.

AdSkate is a technology firm focused on developing innovative solutions and services for the advertising world.